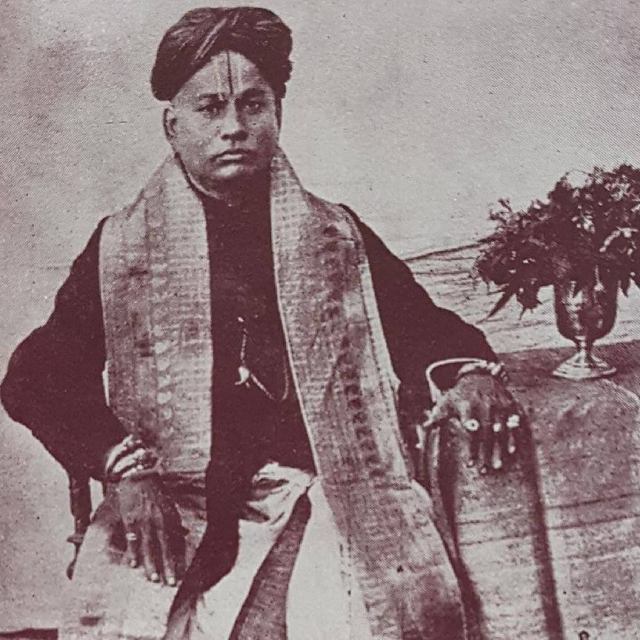 From the crop of disciples that Patnam Subramanya Iyer seems to have had, Mysore Vasudevacharya and Ramanathapuram ‘’Poochi’’ Srinivasa Iyengar have indelibly carved their names in the 20th century composers’ realm of Carnatic music.

Apart from being a brilliant, versatile and visionary composer, Poochi Srinivasa Iyengar is also credited with the current format of the Carnatic ‘’cutchery’’, which was further refined and polished by his superstar disciple Ariyakudi Ramanuja Iyengar.

What makes Poochi Srinivasa Iyengar a force to reckon with as a composer, as a vaaggeyakaara?  His creations span all types of compositions in the spectrum of Carnatic music – tana varnams – both adi and ata talas, a brilliant pada varnam in Vasantha in the slightly offbeat misra jhampa tala, kritis of all kinds – fast paced, of medium tempo, a few of them being magnum opuses imbued with reposefulness leading to almost meditation in true Muthuswami Dikshitar style, one inspired from Western music modelled on the lines of Raghuvamsa Sudha of his guru albeit with a different raga he himself created, javalis, tillanas, kavadi chindus and a ragamalika.  He doesn’t seem to have left any genre untouched!

Poochi Srinivasa Iyengar is fortunate to have his own descendants who have taken it upon themselves to pay homage to his memory and highlight the compositions that are part of the wonderful corpus he has bequeathed to the Carnatic music world.

Foremost among the current generation is R.Sreenivasan who has settled in Singapore.  His mother Padmasani Ramaseshan, was an active performing vocalist based out of Madurai till the late 1980s after which circumstances forced her to give up everything for the sake of her family.

Despite having to give up music, the blessings of the illustrious lineage of Poochi Iyengar ensured that she kept in touch with music and the musical values she had garnered through her own journey as a musician, remained with her throughout.

‘’Do you know,’’ she said to me the evening we landed in Singapore, ‘’the family considers the Todi heavy weight Sri Venkatesam akin to something much more than the evening Pooja.  After the lamps were lit in the evening, Poochi Iyengar would sit in the Pooja room and render this kriti with intense devotion.  Perumal is said to have appeared in front of him…’’

Listening to her, one got the impression that this wasn’t mere family sentiment or a hagiographical recalling of an incident deliberately created to add a dramatic element in harikatha expositions.  She stated it quietly and most matter-of-factly.

‘’Every kriti has a history – a story by itself’’, she continued and proceeded to tell me the story behind the creation of the well-known saraguna palimpa (which is common knowledge in the Carnatic music fraternity) and satbhaktiyugalga (Ananda Bhairavi).

Padmasani Mami’s enthusiasm was truly infectious and it was fascinating to listen to her account of the Poochi lineage.

Organizing any festival involves complete dedication and commitment and Sathguru Swamiki was no exception.  Well-known SIFAS was the venue and the officials from the respected institution especially the president Vidhya Nair responded with great enthusiasm.

The audience response was highly encouraging on all the three days.  The sound system professionals of SIFAS ensured that the microphones were well-balanced in order ensuring optimal and high quality output.

The first day’s celebrations were swung into motion with the President Vidhya Nair, lighting the kuttuvilakku along with veteran S.Kasinathan and the principal of SIFAS, Shankar Rajan.  Sreeni’s mother Padmasani Ramaseshan rendered the kriti ”varam ondru tara vendum”, an evocative composition of Karaikudi Rajamani Iyengar in the raga Aarabhi, set to adi tala, as the prayer.  After delivering the welcome address, Sreeni called upon Sampath Sundararajan to highlight aspects of Poochi Iyengar, and his merit as a composer.

My concert was scheduled on the first day and I started with the super well-known varnam in Mohanam – Ninnukkori.  While it’s now mainly regarded as ”a varnam for kids or beginners” (and never mind that the likes of GNB and then later KVN have revelled in singing this varnam), as I revisited it, one thing made itself amply clear to me.  Ninnukori is a varnam that does have its own unique weight and certainly cannot be dismissed as just a beginners’ varnam.  Additionally, one remark made by Sreeni’s mother was significant – she said that Poochi Iyengar and his descendants would always, without fail, sing a few avartanas of kalpana swaras for whatever varnam they began their concert with.  Hence if one concludes with a few rounds of swaras, this adds an additional bonus to an already sparkling Ninnukkori.

It would not be out of place here to mention how I learnt Sri Venkatesam many years ago.  It was the late Smt. Kanakam Subramanyam (wife of my revered guru Shri TRS) who suggested that I learn this from him.  She had learnt this masterpiece in her childhood in Salem and remarked on the highly unusual beginning – how the syllable ”ven” of venkatesam leaps up to the dhaivatam of the middle octave from the lower shadjam.  She had her own notation of the kriti in a beautiful handwriting…

Coming back to the concert, I was well-supported by my team which comprised of Nellai Ravindran (violin), Tripunithura Sreekanth (mridangam) and Mahesh Parameswaran (ghatam). 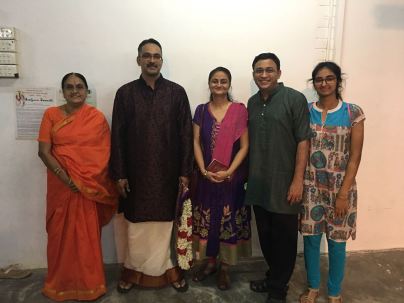 With Anusha and her family – her mother-in-law in the pic was the student of the one and only TMT!

With a friend of many decades Sreyashi Datta 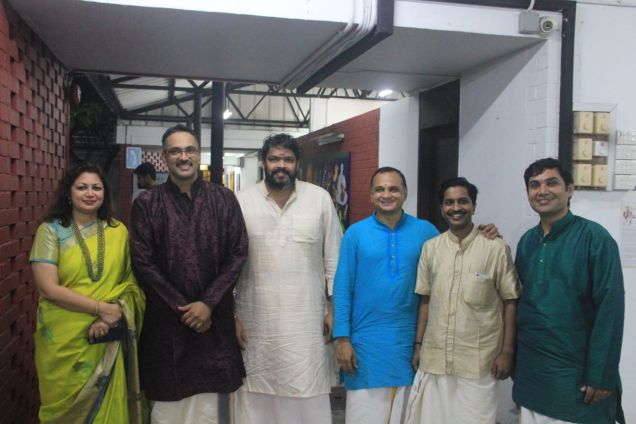 The 2nd day saw V.Navaneet Krishnan, student of the one and only Palghat K.V.Narayanaswami, rendering some of his guru’s concert staple items.  Navaneet started off with the brilliant Varali varnam (set to the very unusual chatusra ata tala).  Ably support by Naveen on the violin, Navaneet’s main item was an evocative rendition of the Poochi masterpiece Paramapaavana Rama in Poorvikalyani.  True to his guru’s style Navaneet dispensed with long and involved korvais and wound up his swara segment concisely.  Subramaniam Radhakrishnan and Mahesh Parameswaran’s neat and succinct taniyavardhanam deserves special mention.

One of the highlights of Paramapaavana Rama is undoubtedly the beautiful chittaswaram, especially some of the panchama varja phrases that add their unmistakable charm.  Similarly the chittaswaram of his other magnum opus Saraguna Paalimpa is simply outstanding!  I personally have a yen for chittaswarams and naturally Poochi’s compositions are a joy to sing!

Other items of Poochi Iyengar that Navaneet included were neekelanaa (Devamanohari – again with a brilliant chittaswaram!), Samaja varada (Suddha Saveri), Satbhaktiyugalga (Ananda Bhairavi) and the tillana in Todi.  Incidentally the Todi tillana I was told, is often performed by Kalakshetra.

One highlight was Navaneet’s rendition of the popular Kapi kriti of Tyagaraja – ”intasoukhyamani”.  The addition of the bhaashaanga notes of Kapi for this kriti is attributed to Poochi Iyengar, a fact I didn’t know earlier. 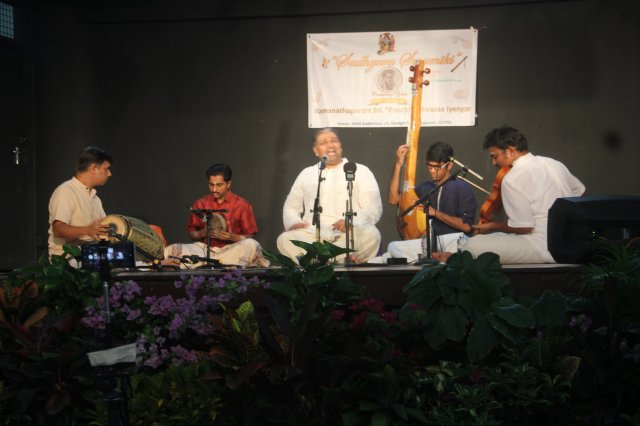 V.Navaneet Krishnan with Naveen Kumar (violin), R.Subramanian (mridangam) and Mahesh Parameswaran (ghatam) and with KVN’s grandson Chandru on the tambura

The concerts ended around 9:30 PM, after which, all of us would troop to the nearby Sri Lakshmi Narasimhan Restaurant, Serangoon Road, for dinner.

A word or two about this rather unusual restaurant – the women who come to the tables to take orders and serve, might be our elder sisters, cousins or aunts.  Looking extremely unlike the conventional ”waitresses”, the way they take orders from each table makes us feel that we are not dining in a restaurant at all – we might be having dinner at a close relative’s place.  Moreover on the second day, after Navaneet Krishnan’s concert, we were served the Kerala ada pradaman (one of my mega favourite paayasams), as a bonus.

Coming to know that we were in the midst of the Sathguru Swamiki festival, they requested us to sing in front of Mahaperiyaval’s photo that adorned the billing counter in the restaurant.  Navaneet Krishnan rendered Periyasami Thooran’s Punniyam Oru Koti, with Padmasani Mami joining in with gusto.  Since it was almost closing time for the restaurant, there weren’t many diners and there was an atmosphere of calm and reposefulness with Navaneet along with Mami singing sonorously the Keeravani kriti.  The owners of the restaurant listened to the rendition in rapt attention and expressed their deep gratitude.

‘’Due to the running of the restaurant, we just don’t have the luxury to go out for these kind of events in the evening,’’ they said, delighted and touched by the impromptu rendition. ‘’So, thank you so very much!’’

For me – a unique experience!

Office bearers of the Sri Lakshmi Narasimhan Restaurant. This was after Navaneet rendered Punniyam Oru Koti…

A word of profuse thanks to my hosts – to Subramaniam Radhakrishnan (Prasad), who incidentally was on the mridangam for Navaneet’s concert and is a student of the formidable maestro Guru Kaaraikkudi Mani, his wife Aarti and Prasad’s mother.  I was peacefully allowed to do what I liked, and this included badgering Aarti for endless cups of tea, which the latter most graciously provided me with.

Travelling outstation with fellow musicians has multiple bonuses.  We get to interact and get to know one another at a much deeper and personal level.  It’s a no brainer that discussing music makes time go SO quickly.  Sampath sir shared his experiences as a student of the one and only Madurai T.N.Sheshagopalan – it was wonderful listening to him talk about his guru.  Later in the flight, when Navaneet came and sat next to me and when we started discussing his guru KVN’s music, ragas – especially Geyahejjujji (Navaneet would know what I mean!!!) and several other musical ideas, it was quite a shock to realize that the 3 hours 45 minutes flight was coming to close as the stewardess asked us to fasten our seatbelts and prepare for landing in Singapore’s Changi airport.

With Harshita, Sampath sir, Navaneet and yours truly at Chennai International Airport

One word about the airline we travelled.  Yes, it was by the much-maligned Air India and our journeys to and fro were, I have to say, EXTREMELY comfortable!  There’s enough leg room in the aircraft, the food was excellent and the service was prompt and courteous.  Air India, it is quite evident, seems to have undergone a massive makeover, definitely for the good.  Long may it last.

In conclusion, I would say that it was an honour to participate in the first edition of ‘’Sathguru Swamiki’’.  Credit obviously goes to my Guru the one and only TRS and his blessings.  He taught me several of Poochi’s kritis including the outstanding Sri Venkatesam and Saraguna Palimpa.  While one of TRS’ early gurus was a disciple in the Poochi lineage, I was really gratified to know that Kotiswara Iyer, whose direct sishya parampara I take considerable pride in belonging to, was also a student of Poochi Srinivasa Iyengar.

Sreenivasan Ramaseshan worked very hard to make the first edition of Sathguru Swamiki a success.  Kudos to his family, especially his wife Krithiga who has been his constant support and encouragement throughout and it was so heart-warming to see her enthusiasm right from the way she received us at the airport. 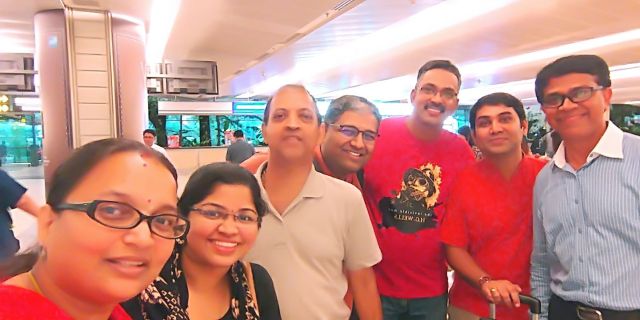 Arrival at Changi with Krithiga, Sreeni and Sampath sir’s brother in law (at the extreme right)

On the way to Punggol – a delectable dinner by Krithiga awaits!

In conclusion, my biggest takeaway by participating in Sathguru Swamiki has ensured that Poochi Iyengar will always be an active part of my concert repertoire with me including his compositions much more often.

Carnatic vocalist, based in Chennai. Disciple of Late Shri T.R.Subramanyam (TRS).
View all posts by Mohan Santhanam →
This entry was posted in Uncategorized and tagged Poochi Srinivasa Iyengar. Bookmark the permalink.